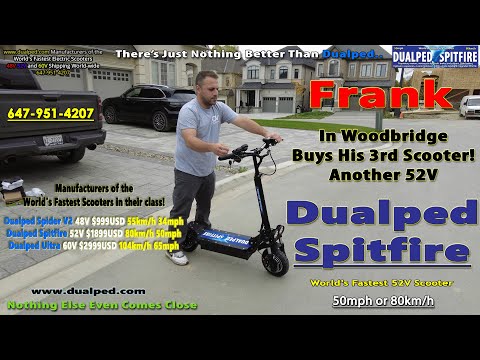 I had the pleasure of meeting up with Frank again in Woodbridge folks who has now bout 2 Dualped Scooters a Dualped Spider V2 ($999USD or $1299CDN) and now 2 Dualped Spitfires ($1899USD or $2450CDN) and loves them! While delivering his 3rd scooter we got a call from another gentleman by the name of Joe which I ended up talking to while I was with Frank and Frank also talked to him see what they said!

The Spider V2 is the fastest 48V scooter anywhere and the Spitfire is the fastest 52V scooter anywhere folks there is no others that even comes close! With proprietary motors you will have a solid scooter that will last you years to come. Unlike the competition that use generic motors this Spitfire can’t be beat, with hydraulic brakes it also has motorcycle rear hydraulic brakes and calipers that stop on a dime! We also include a set of extra tires. a set of extra tubes, a set of extra brake pads, an extra charger so 2 in total plus a FREE seat all that for ONLY $1899USD or $2450CDN and it’s now in stock!

If you want to get a Dualped Spitfire or a Dualped Spider V2 call me at 647-951-4207 or hit my website at www.dualped.com and contact me via WhatsApp or messenger they are at the bottom.

Don’t forget to subscribe as we are a manufacturer of the world’s fastest electric scooters and we give them away FREE in a lucky draw every 10,000 subscribers we get here on YouTube, we already gave one away at 5,000 subscribers and we will do it again at 10K and we will continue to give them away every 10K subs thereafter. All you have to do is subscribe, like & comment on all our videos going forward and if you share we can grow faster and give away many more.

http://www.dualped.com you will get our proprietary motors and controllers that cannot be matched anywhere giving you years of enjoyment unlike generic motors that the competition uses where they burn out or slowly die even just after a couple of months!

World’s fastest 60V scooters, Pick yours up today we have the BEST proprietary motors & controllers in the business!

Dualped Scooters absolutely smoke the competition! We take pride in our scooters and unlike the cheap Chinese scooters you get online we equip our scooters with proprietary motors, controllers and batteries. Each motor is hand picked and fine tuned to get the highest RPMS and torque possible to achieve the highest speeds possible without burning the motors which is a common cause to cheap generic motors that are on just about every other scooter out there. These are ONLY available from us directly, you are buying direct, we are the manufacturer of these scooters and unlike the Korean competitors who charge $6000-$8000 you will pay a fraction of that here. Go to www.dualped.com and get yours today!

Folks we’ve already given away a FREE scooter and there are a ton more to give away so please subscribe, like and share for your chance to win one, here is the first lucky draw!

and here is the customer Derrick a.k.a. Talon Black taking delivery

Subscribe, Like and Comment for a chance to win a Dualped Scooter!! The more likes and comments you give my videos the better chance of you winning!

To order one go to www.dualped.com for any other questions feel free to email us at dualped@gmail.com YES we ship world-wide.